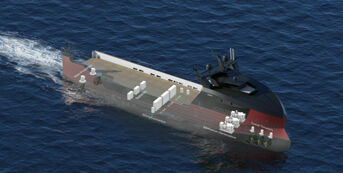 A shift in power distribution systems

Green energy technologies such as batteries, fuel cells, solar and wind are on the rise in shipping but these will require a shift in existing power distribution systems onboard vessels to realise gains in fuel efficiency and environmental performance, according to Vard Electro.

However, the use of AC switchboards is now being challenged by the emergence of renewable energy sources and energy storage systems mostly using DC (direct current) that require multiple DC-AC conversion, meaning more components with greater complexity and less control of the power system.

This has raised the focus on the potential advantages in terms of controllability, flexibility, cost savings and reduced fuel consumption of DC switchboards, which were first developed about a decade ago but have so far only been installed on a limited number of vessels such as hybrid and all-electric ferries, PSVs and fishing vessels.

“AC switchboards have traditionally been used to transmit energy produced by diesel-electric generators to the main AC consumers - propellers and thrusters - via frequency converters but are no longer the optimal solution when utilising alternative DC-based sources that can be much more easily integrated into a DC distribution system,” says Jogeir Skinnes, product manager for Power & Propulsion at Vard Electro.

“As well as ease and flexibility of integration, another key advantage of a DC main switchboard is that it means both the engines and propulsion system can be run at variable speeds to better optimise fuel consumption and thereby cut CO2 emissions.”

A DC switchboard makes it possible to run the engines at a lower rpm and dynamically follow the load on the AC consumer - such as dynamic positioning (DP) system or propeller - to achieve greater fuel efficiency within a wider operating window.

A DC switchboard, such as that supplied by Vard Electro within its SeaQ Power product range, is therefore able to cut fuel consumption and emissions significantly through variable-speed operation versus a fixed-speed AC system, while also reducing wear-and-tear on the engine to curb maintenance costs.

Skinnes estimates fuel savings of as much as 20% can be achieved when running DP on a DC system, and around 10% across harbour, transit and DP operations.

DC switchboards are therefore appropriate for vessels with variable load requirements including PSVs and cable-layers with DP to give high efficiency on low load, and fishing vessels to better control peak loads on winches.

Furthermore, zero emissions can be achieved with fully-electric ferries that can be charged from shore directly into the DC power distribution system.

Additional fuel efficiency gains can be achieved by integrating battery storage plugged into the DC switchboard as this can be used as a spinning reserve to reduce the number of running generators, while maintaining the requirement for redundancy. 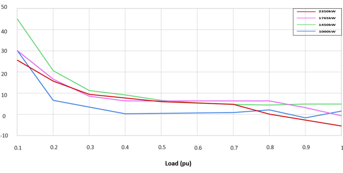 Skinnes points out that batteries can boost dynamic performance and responsiveness for propulsion and thrusters, especially when used together with LNG and hydrogen fuel cell engines that typically have lower ramp speeds, as well as handle big load variations through peak shaving.


Vard Electro has also developed a SeaQ Micro-Grid that can be used to provide variable speed functionality for parts of a vessel - for example, to boost a propeller or winches with battery power - while keeping the AC main distribution system to feed consumers with a steady load.


This technology would also allow for the use of a smaller main engine running on lower rpm aligned with battery storage in a DC switchboard to deliver more power to propulsion and other systems when needed. 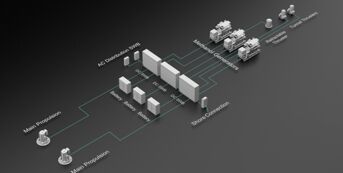 Vadset points out there are more factors to control with an AC system - such as both active and reactive power, frequency and voltage - whereas for a DC system you only need to control the active power and voltage. The latter also needs fewer converters and other components that gives it improved controllability and robustness.

This makes the DC switchboard a more effective and flexible power management system with higher reliability and failsafe functionality, while facilitating easier integration of new energy sources in line with cost and availability, according to Vadset.

Skinnes says: “We are seeing a growing rate of adoption of DC switchboard systems in the industry as interest increases for fuel cells using hydrogen, ammonia and methanol. This technology will be an important enabler for alternative fuel sources in future.”